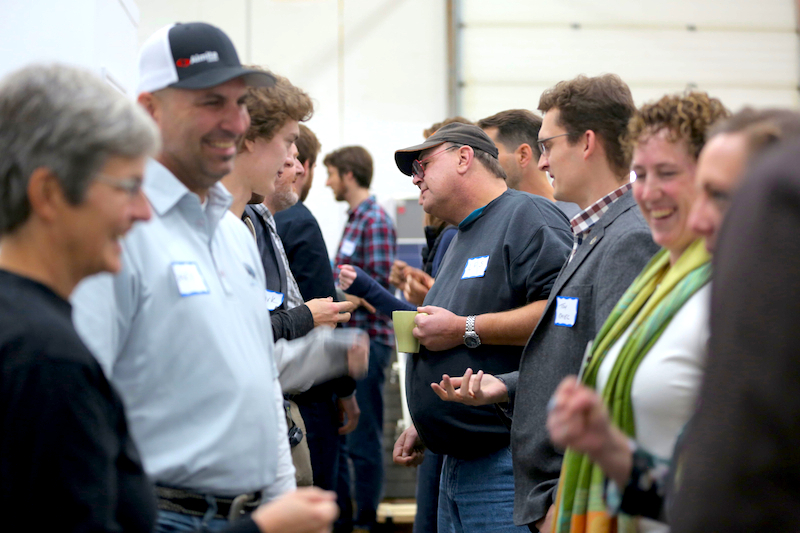 Sometimes in this vast and complicated world, it’s easy to feel a bit lost and hopeless. It can be hard to see progress or positives in the face of so much struggle. But I find if I focus things inward and think about the community with which I work to put renewable energy on the map, my mood changes. Drastically.

Four weeks ago Iron & Earth concluded a whirlwind engagement tour in Edmonton, Alberta. It started with a Visioning Workshop where we we invited both our committed members and prospective allies to engage with our core leadership team and each other to learn about everything we do, identify key priorities and contribute ideas for the next phase of our work. 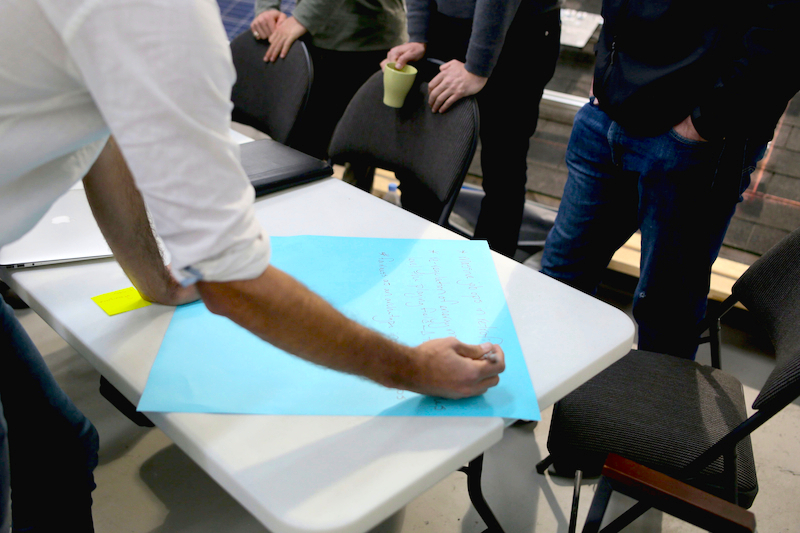 At the end of the session, participants committed to engage with their co-workers and communities to recruit new members in working toward chapter development. The visioning day was followed by a few drinks and a celebration of everything we’ve accomplished together. We also had a special opportunity that evening to get to know Leduc-Beaumont MLA Shaye Anderson and discuss specific opportunities in the region.

After all that, we hosted our first ever AGM where we elected a new board of directors and determined our bylaws. The following day we embarked on an intensive media training. Our board and other worker members got comfortable being in front of the camera and practiced discussing our work — and let me tell you, did it ever pay off... 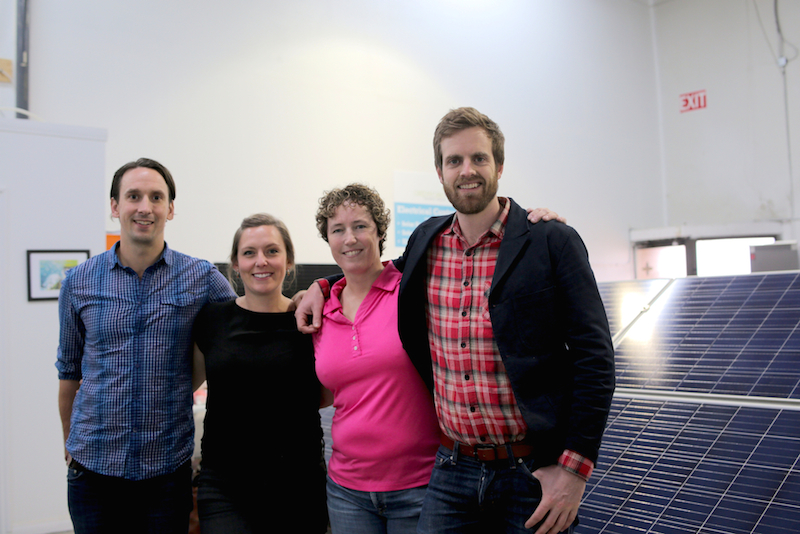 The week ended with a press conference at the Gridworks Energy solar training center where we stood side by side with a range of allies and presented our completed Workers’ Climate Plan report to a room full of news crews and reporters. It was the culmination of four months hard work surveying worker members and non-workers, and conducting consultations with industry and allies. By all indications, the event was a smashing success. 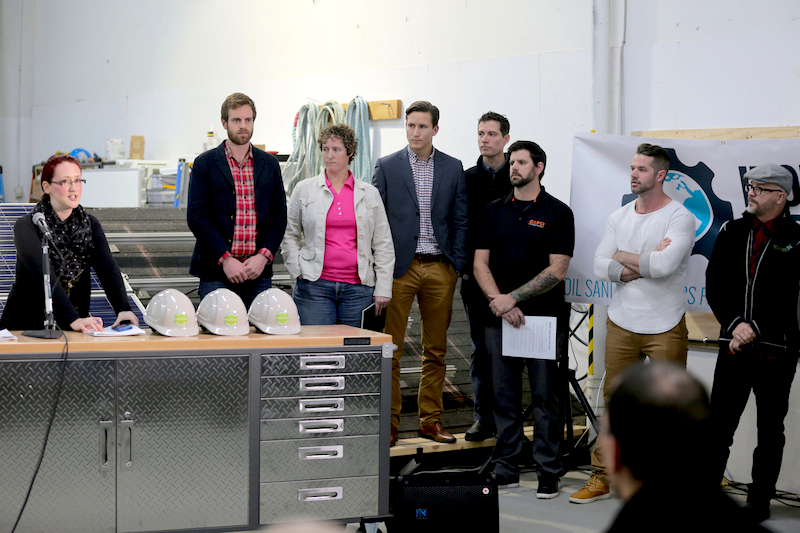 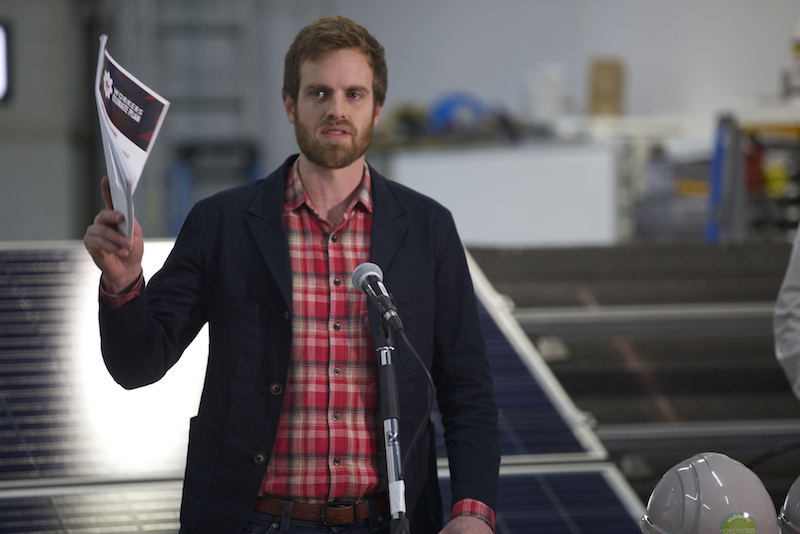 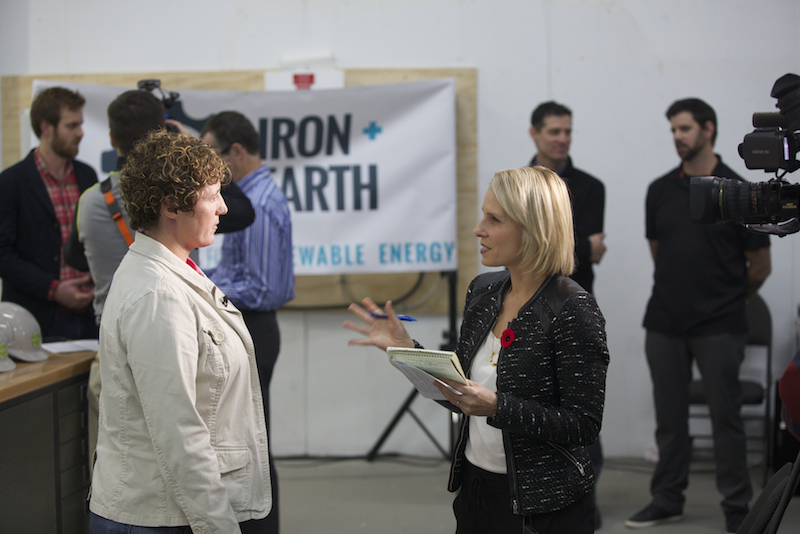 Since calling on government to retrain, retool and rebuild Canada’s energy sector, we’ve received a positive response from a number of workers, unions, and political leaders. As we were hoping, the WCP report has immediately become a helpful conversation tool. Within the first week of launching the report, we engaged with a number of tradespeople, MPs, MLAs, wind energy contractors and developers, unions, and oil and gas businesses about how to refine and implement our proposed policies.

Our press conference garnered the attention of over a dozen major news outlets and websites. In case you missed it, you can get caught up on Workers’ Climate Plan coverage from the Edmonton Sun, Global News, the Business News Network, and the Edmonton Journal. In fact, just last night director Kerry Oxford was on CBC’s On The Money discussing the report! Check out her amazing interview at the 27 minute mark.

This month we’ve really begun to witness our community come together. Nothing underscores this point more than our newest board director, Delia Warren, flying all the way from St. John’s, Newfoundland and Labrador all the way to Edmonton, in a leap of faith that she was committed to a green energy revolution through the work of Iron & Earth.

You see, Delia wasn’t elected to the board until after meeting us all in Edmonton. Up until hopping on the plane, she’d only ever met members of our Iron & Earth East team and got familiarized with our work from afar. But buying into our organization, running for the board of directors and committing to participate in a national press conference launching the Workers’ Climate Plan? She knew she was all in before ever stepping foot in Alberta because of her burning passion for renewable energy. 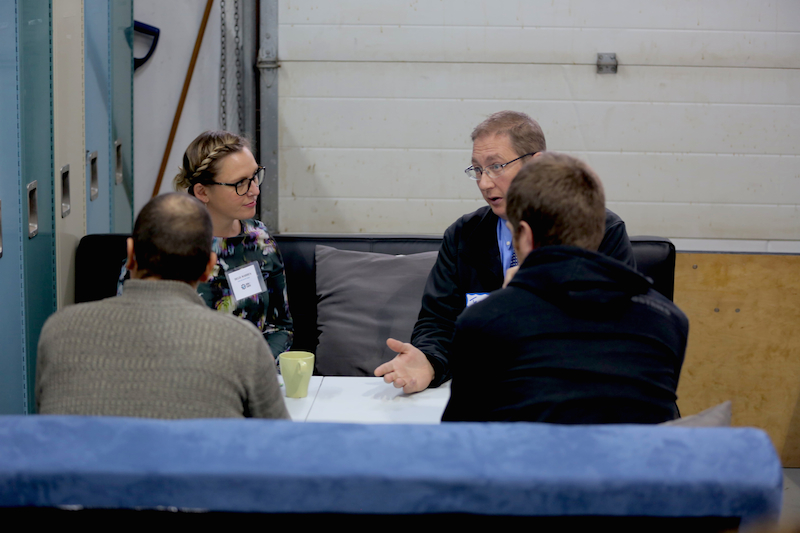 When we elected Delia to our board of directors, we knew we were going to make big things happen in our eastern chapter. Delia is a mechanical engineer with seven years experience working in the offshore oil and gas industry in Canada, Europe and Africa, before getting laid off in June following the drop in oil prices. She looks forward to applying her engineering skills in building a renewable energy economy for Canada.

Delia’s also our new director of Iron & Earth East, based out of St. John’s, where they’ll focus their efforts on building a renewable energy-powered, year-round greenhouse in 2017. Key features of the greenhouse include continued training programs for trades workers, an education centre for youth, and year-round food harvesting.

We were very excited to bring on Matthew Linnitt, our Membership Organizing Coordinator, as one of our new board directors as well. Matthew has worked as a helicopter pilot for the past eight years and as a pilot operator in the oil and gas fields for the past two years. During his time in the oil fields, he has seen workers suffer from market volatility, cutbacks and layoffs. His dream is to see Canadian oil and gas workers gain the skills to become global leaders in renewable energy production.

Matt explains that our next major engagement push will be after the federal government releases its final reports on their approach to climate change in December. The specific tactics our members will engage in depend on whether government adopts the recommendations outlined in the Workers’ Climate Plan. Iron & Earth could organize to put pressure on local Members of Parliament to support the WCP through a direct outreach campaign. In any case, we’ll be providing organizer trainings in early 2017 to give local chapters the skills and confidence they need to recruit new members and develop their own grassroots campaigns.

We were also incredibly lucky to bring long-time Iron & Earth all star Kerry Oxford as a board member. Kerry’s been rocking it behind the scenes for months. Before joining the board, Kerry was already travelling up and down the highways of Alberta, attending town halls and discussing renewable energy with her peers. She also recently had an op-ed about Iron & Earth published in the Edmonton Journal: Time for Alberta to invest in a new kind of energy workforce.

Since joining the board, Kerry’s been doing more interviews for radio, television and print than we can keep up with, spreading Iron & Earth’s message far and wide. She’s also working hard on developing the foundation of our Calgary chapter. In the new year, Kerry and her team will host a series of meetings to get folks in that area updated on what we’re doing and engaged in our work.

We couldn’t be more grateful to have someone like Kerry on the team. While we regard Kerry and her wealth of experience as one of our top expert minds, she takes a very humble approach to working with Iron & Earth members and is keen to listen to their stories. Kerry says she’s looking forward to offering real solutions, rather than just talk, to her colleagues who are tired from these past few years. She wants to change the narrative in Alberta — look back on this 5-10 years in the future and see how Alberta was changed for the better by the actions of a new wave of forward thinkers.

All of this incredible activity has spurred incredible growth in our organization. In this quarter alone, we’ve had 77 new working members join our organization. That is the largest uptake since our launch and a 300 per cent increase on the previous quarter. We’ve also had 629 new supporters join us in our mission to realize a green energy economy. That’s huge!

Our challenge right now is to maintain the engagement and excitement we felt with our members at the AGM and continue to grow our membership while we wait for a response from the federal government. In the meantime, there’s so much work to do. We’re going to keep deepening relationships with our membership. We’re going to make sure the world knows all about Canada’s real oil and gas workers who see a better path forward.

There's an industrial revolution emerging — that much is for sure. Where oil and gas workers are positioned within it has yet to be determined. There’s absolutely no reason to leave workers and families struggling in the wake of this transition.

If you haven’t already, please support our call on the governments of Alberta and Canada to foster job opportunities for skilled workers that are aligned with our climate commitments. All you have to do is sign your name here: http://www.ironandearth.org/call_for_government_action.

Thanks for sticking with us on this journey.

← Previous post: Oilpatch workers have a plan, but Ottawa needs to act
→ Next post: 365 Greenhouse has broken ground