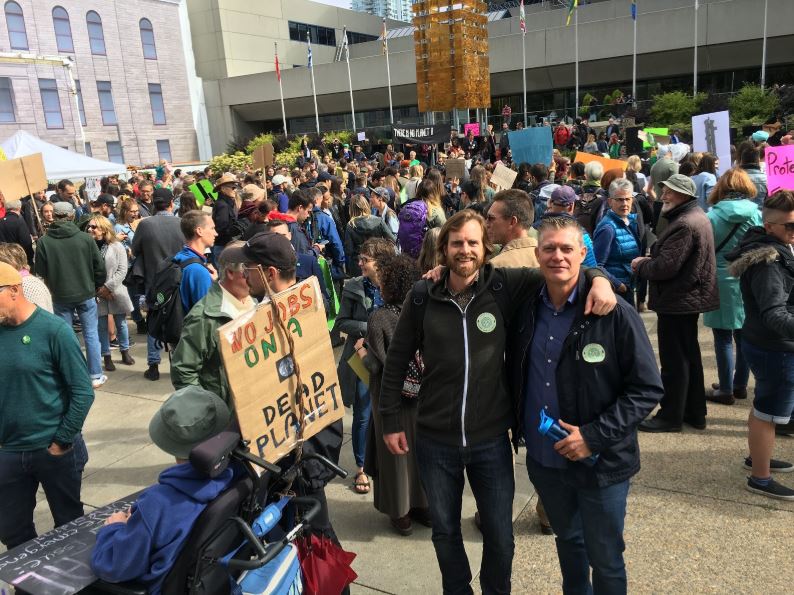 I’m feeling inspired after watching and supporting a week of climate action around the world. On September 20th I proudly joined our newest board director Bruce Wilson in Calgary and millions of people around the world, to participate in the first day of the world's largest climate action in history, the Global Climate Strike.

The Global Climate Strike stems in part from a youth-led movement called Fridays for Future which began in 2018 when students started protesting to demand climate action. The movement has grown exponentially and young people have woken up much of the world with their powerful climate strikes over the past year. Now they are spearheading a week of action that began on September 20th and concludes with the largest action to date this Friday, September 27th.

Where do workers stand during this Climate Strike? The International Trade Union Confederation (ITUC), which represents over 200 million members, has made it clear that they are putting their full support behind the movement. Watch this powerful statement by ITUC General Secretary, Sharan Burrow, to find out more about why they are taking this position.

One inspiring moment on September 20th was meeting a worker with a sign saying “Oil + Gas Worker for the Environment”. His name was Gable and had not yet heard about Iron & Earth but was thrilled to learn that there was a community of like-minded workers that he could become a part of.

When I asked Gable about his story, he said "I am a Red Seal electrician who has been working in the oil and gas industry for four years and have been looking to transfer my skills to renewable energies. I joined the strike because I wanted to show to Calgarians and Canada that there are people in the oil and gas industry who are worried and care about the environment and are willing to stand up for change."

Governments around the world have made progress in the past few years, but future generations, as well as today's workers, are counting on bolder leadership to set the direction and policy for a sustainable future. More ambitious targets for sustainable energy development means more jobs for fossil fuel industry workers like Gable to build the infrastructure required.

We encourage our members and supporters who are legally able to do so to join the Climate Strikes on September 27th. Make sure to check with your employer and/or union before you strike as some workers cannot legally take strike action.

To find an action near you, go here. I hope to see you there!

If you cannot attend but would like to take this time to support a prosperous transition for workers like Gable, please consider donating to Iron & Earth today.