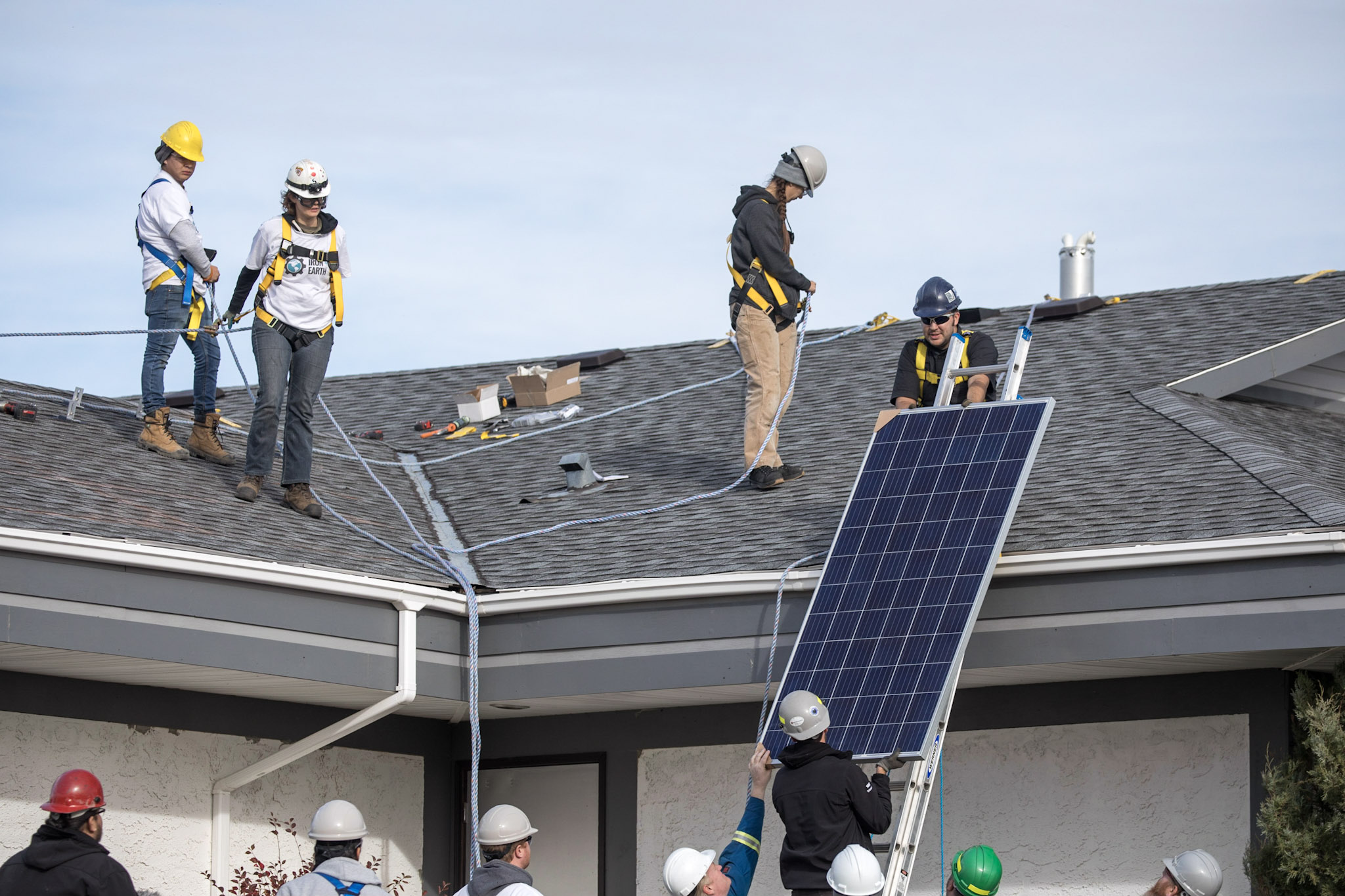 Louis Bull Tribe of the Maskwacis Nation, Alberta — Oil and gas workers and members of the Louis Bull Tribe installed rooftop solar panels on a community daycare today, as part of an initiative to give workers new opportunities in clean energy.

15 trainees installed the panels during a five-day upskilling course, the first in the “Solar Skills” program launched by Iron & Earth. The goal of Solar Skills is to upskill 1,000 oil, gas and coal workers — as well as indigenous community members — as solar specialists through hands-on installations.

A second training course will be held in Newfoundland and Labrador in two weeks, but Iron & Earth is calling on governments to step up and develop a national upskilling initiative. This kind of initiative will upgrade the skills of a wide range of tradespeople for a host of clean energy and energy efficiency technologies.

“The skills we have as energy workers are versatile and transferable, but support is needed to enable workers to diversify,” said Jen Turner, Director of Communications at Iron & Earth and a wellsite contractor. “Hundreds of workers have already signed the Solar Skills pledge, calling on the government to invest in worker upskilling. We hope they listen, and that more Canadians will realize what’s possible with training programs like this.”

Struggling oil, gas and coal workers have the ability to build a new energy economy in Canada. The province of Alberta plans to get 30 percent of its power from renewable energy sources by 2030, which will create many new opportunities in solar, wind, geothermal, biomass, and biofuel energy projects. Similar opportunities will be created in other provinces as Canada implements its plan to phase out coal-fired electricity by 2030 and reach near net-zero emissions by 2050.

This week’s training program was developed as part of the collaboration platform of the Energy Futures Lab and is a partnership with Iron & Earth, Gridworks Energy Group, and the Louis Bull Tribe. It was sponsored by Enbridge and Suncor Energy. Iron & Earth is actively seeking multi-stakeholder collaborations as it scales this initiative up across the country.

“At Enbridge, we know that all forms of energy will be needed to meet people’s needs as we shift to a low-carbon economy and we’re doing our part to be involved in that transition. That is why we are investing in developing this workforce today,” said Kim Brenneis, Director of Community and Indigenous Engagement with Enbridge.

The Louis Bull Tribe started installing rooftop solar last year, and has 406 solar panels installed with the completion of today’s project. That solar infrastructure will save the community over $10,000 in energy bills per year, with another round of solar projects coming to the community soon.

“Our community first became interested in solar to reduce costs, but we now see its potential is so much greater,” said Desmond Bull, Councillor of the Louis Bull Tribe. “Renewable energy projects are a tool First Nations can use to create economic opportunities, but also to restore the harmonious relationship that our ancestors had.”

The group came together during the spring of 2015 when oil prices started to fall, and is pushing for investments in green energy and re-training in renewables. Our membership continues to grow and includes workers from a variety of industrial trades, including boilermakers, electricians, pipefitters, iron workers and labourers. We want to see workers and families thrive. We want the green energy revolution to bring us closer to financial security and our climate targets — all at the same time.

The Energy Futures Lab is an Alberta-based, multi-interest collaboration designed to accelerate the development of a "fit for the future" energy system. Learn more at energyfutureslab.com.