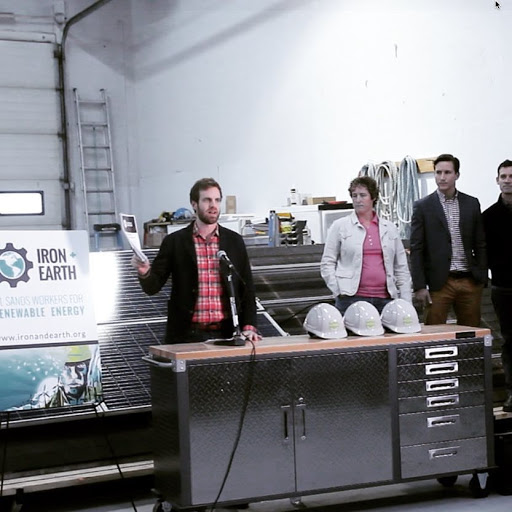 The workers of Iron & Earth are urging the federal government to show bold leadership to put Canada on the fast track to a net-zero economy now. This week we wrote to Prime Minister Trudeau and Deputy Prime Minister Freeland and asked them to enact a plan that will put us to work building the new economy.

The Teck mine cancellation could represent a historic milestone, marking the moment that Canada shifted collectively towards a prosperous net-zero economy. But in order to move in this new direction, we need visionary federal climate policy that includes urgent investments across the country, with special attention to Alberta and Saskatchewan. Here is the text of our letter:

The Right Honourable Justin Trudeau
Office of the Prime Minister of Canada
80 Wellington Street
Ottawa, ON K1A 0A2

Re: the cancellation of the Teck Frontier project and building the new net-zero economy

Iron & Earth is a not-for-profit organization led by fossil fuel industry and Indigenous workers, whose aim is to help build the policies and infrastructure required to meet climate targets. We are concerned about the increasingly polarized conversation and contexts around energy development in Canada and the significant economic shifts that the recent Teck project cancellation represents. We are writing to urge you to show bold leadership to put us decisively on track to a net-zero economy.

Context
As you know, many people across Canada were shocked and disappointed recently when Teck Resources Limited announced that they are withdrawing their application to develop what was slated to be the next mega project for the Canadian energy sector. This event has left many of us in the oil and gas industry worried about our future and the future of the Canadian energy industry.

We also believe that the Teck cancellation could represent a historic milestone, marking the moment that Canada shifted collectively towards a prosperous net-zero economy. But in order to move successfully in this new direction, we need bold federal climate policy that includes urgent investments across the country, with special attention to Alberta and Saskatchewan, to set us on a fast track to economic transition.

We were encouraged by Deputy Prime Minister Freeland’s recent comments that the Teck withdrawal should serve as a “wake-up call” to the fact that we need to find a new path forward on climate change action and economic development. We couldn’t agree more.

We are writing to you today to urge you to do everything in your power to fast track the transition to a new net-zero economy. The workers who would have been earning a living at Teck mine deserve the opportunity to get to work building the net-zero economy now. We stand ready to be put to work.

As you know, in his letter to the Minister of Environment and Climate Change Canada, Teck CEO Don Lindsay explained that "global capital markets are changing rapidly and investors and customers are increasingly looking for jurisdictions to have a framework in place that reconciles resource development and climate change in order to produce the cleanest possible products.”

This statement shines some light on the broader trend of divestment from fossil fuels that is rapidly changing the energy investment landscape. During the past eight years, over 1,200 institutions encompassing more than $14 trillion have divested from the fossil fuel industry.

This capital is now being deliberately re-allocated to low-carbon investments which are perceived to be more long term and durable. Canada can become a welcome home to these investors, but only if we collectively develop and articulate our vision for developing world-leading projects that profitably address action on climate change. We urge you to lead that vision and we are ready to support this process.

Shifting business models
Initial reactions to the cancellation of the Teck mine understandably focus on the jobs that would have been created and the projected loss of income that its demise will cause in many communities and for provincial and federal coffers. However, evidence illustrates that investment in low-carbon and net-zero technologies can yield many times the investment, creating vast benefits for the people and for the climate.

Fortunately, the emerging net-zero economy is a promising new model for both businesses and nations. In fact, although there isn’t yet a publicly available plan for how they will achieve this target, just weeks before Teck pulled its application for the Frontier mine, they committed to achieving net-zero operations by 2050, aligning itself with Canada’s national objective.

Industrial energy efficiency initiatives are an example of these types of projects, which have an annual return on investment of 20-30%. Additionally, every $1 million invested in energy efficiency results in approximately 20 full-time jobs for a year. Meaning, the same $20 billion investment in the Frontier mine would result in nearly 10,000 full-time jobs for 41 years—four times the number of jobs estimated for the Frontier mine over the same time period.

Many of these are industrial-scale jobs that would employ the same workers currently relying on employment in the coal and oil & gas industry. We must stop using the spectre of economic decline and loss of energy-sector jobs as a reason for continuing with the status quo.

Indigenous rights and title
The Frontier development promised jobs for the 14 First Nation and Metis communities who had signed onto the project, while there were other communities in the region who opposed the development. All of these communities should be among the workers at the forefront of a comprehensive plan to stimulate opportunities for good jobs building the net-zero economy, a plan that collaborates with Indigenous communities on a nation to nation basis.

The urgent need to establish a net-zero economy is an opportunity for Indigenous and non-Indigenous communities to build a prosperous transition to a new energy economy together, one that is based on a principled, rights-based approach. This new economy must be grounded in recognition of Indigenous peoples’ right to be self-determining over their own lands and resources.

Climate action
Teck acknowledges in their letter that, “there is an urgent need to reduce global carbon emissions and support action on climate change”. The case for action to decarbonize is irrefutable. As funding and global investment are diverted from the oil & gas industry it is clear that the investment landscape in Canada can only be preserved by embracing the transformative energy technologies that are required to decarbonize our economy and will provide tens of thousands of well-paying jobs.

We understand that the transition to a net-zero world represents one of the largest job creation opportunities the country will ever see. Bold action from the federal government can set Canada on a path towards becoming a global leader, putting our businesses in a position to support other nations in their own transitions. We ask you to put the policy frameworks and roadmaps in place for climate action to accelerate at the required scale and pace.

Conclusion - towards a brighter economic future
The cancellation of this project creates a new type of certainty for the future of resource development and job creation in Canada—new mega projects in the oilsands are increasingly unlikely and business and government need to identify new opportunities to generate profits and fuel the economy.

This moment calls for a scale of investment that is unprecedented outside of the war years and the time for action is now. But even as the magnitude of the task ahead becomes increasingly clear and the timeframe for action narrows, our country remains polarized and fractured. It is time to come together. But not in an attempt to hold onto the past – it is time to come together towards a new future. Our federal government must play a central role in building that new future together.

Even as we recognize the part that the fossil-fuel industry has played in powering our modern economy, we must also recognize that the time has come for change and seize the initiative or risk being left behind.

And so we stand ready to be put to work. But we ask one thing of you: we deserve a plan. We urge your government to engage with workers like ourselves to lay out a pathway that leads to a prosperous transition to a new economy of wellbeing for all workers, families, communities and traditions.

The Honourable Jonathan Wilkinson
Minister of Environment and Climate Change

The Honourable Andrew Scheer, M.P.
Leader of the Official Opposition

The Honourable Jagmeet Singh, M.P.
Leader of the New Democratic Party of
Canada

The Honourable Yves-François Blanchet, M.P.
Leader of the Bloc Québécois